I have decided to step up my art game on the road. It can be difficult to find time to do art between catching buses, seeing temples, deciding on accommodation, and all the hundreds of other things we have to do while traveling abroad. So now I’ve decided No More Excuses, it’s no longer an option not to sketch.

Everyday in March I am going to do a drawing from life. The parameters I have set for myself is fifteen minutes minimum, on the sketch pad, with pencils, inks, or brush. I will post the first seven that I have done here and then at the end of the month I will post all thirty drawings. Everyone is welcome to join me at any time. 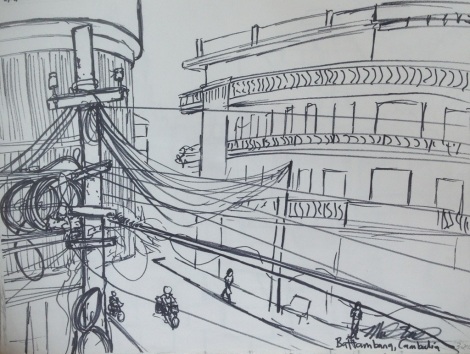 A scene from the Gecko Café in Battambang. The wiring is pretty much a very neat job for what you normally see out here.
Battambang, Cambodia
March 2, 2013 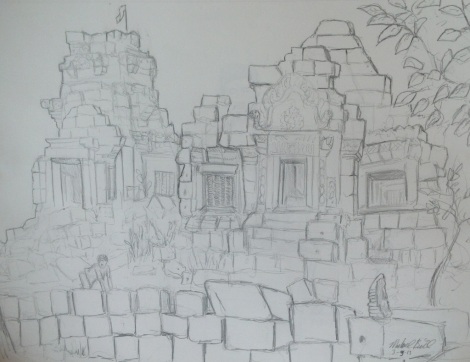 These sketches were done at Wat Ek Phnom, a Khmer temple built in 11th Century. There is young man with Polio who was crawling all over the monument asking for money. The second drawing was of him.
Wat Ek Phnom, Cambodia
March 3, 2013 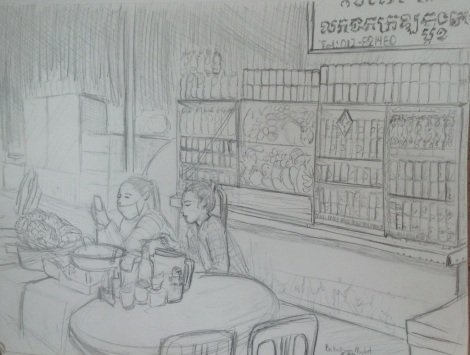 Teenage girls doing what teenagers do, chatting on their cell phones and checking Facebook as they work. This is a typical city market that has a little of everything you could ever need. It’s the Phsar Naht Market, which was built by the French in the thirties.
Battambang, Cambodia
March 4, 2013

A street corner near the Gecko Café. The city is full of French Architecture.
Battambang, Cambodia
March 5, 2013 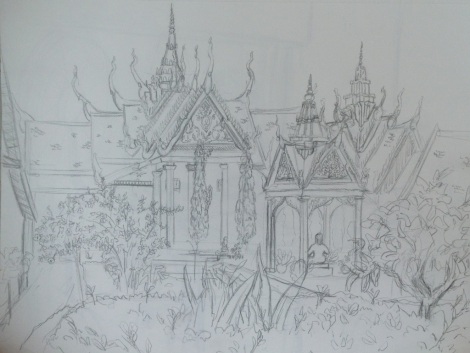 The courtyard in the National Museum in Phnom Penh. This building was the most gorgeous I had seen in all Cambodia. The roof line is just insane.
Phnom Penh, Cambodia
March 6, 2013 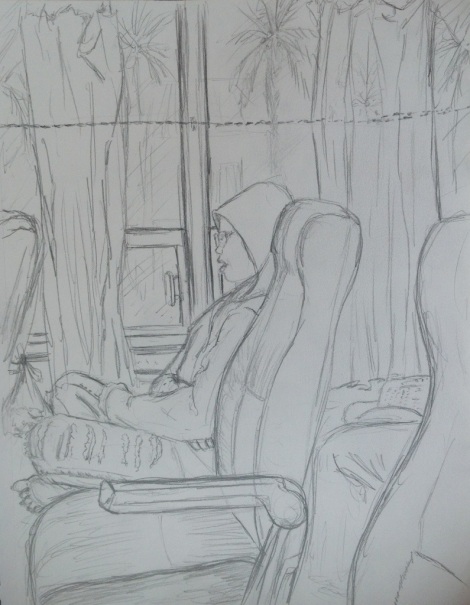 A girl doing her best to ignore me on an eight hour bus ride from Phnom Penh to Kratie.
Cambodia
March 8, 2013 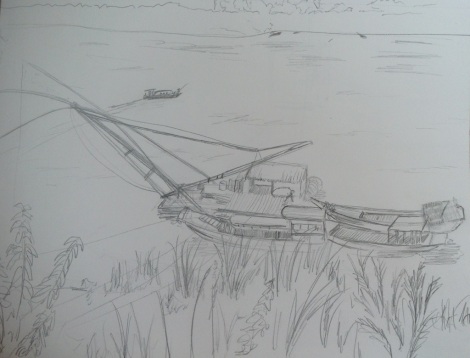 The mighty Mekong river, in the dry season, and might I add, the hot season. Miserably hot today, but with a little luck we might see the Irrawaddy Dolphins.
Kratie, Cambodia
March 9, 2013

4 responses to “A Sketch A Day – Thirty Day Challenge”