New Years Day is normally a day of recovery for most people, the start of a New Year with the telltale headache and nausea after a dazzling night of festivities to bring in the New Year, but not here in Philly. Because in Philly, we have a tradition that goes back hundreds of years, before the United States was even a country, called the Mummer’s Parade. Sure it was not always as glorious as it is today, back then people would just walk door to door, dressed as clowns, be given ale and snacks. During George Washington’s seven years in office, the parade went on every New Years day. The revelers would dress up as clowns, even parodies of Washington himself, and put on skits. The parade is really a symbol of America with its roots coming from European and African traditions.

Living in Philly now 18 years or so, I have to say for the first few years the Mummers did not even cross my path. Parades were for kids and old people as far as I was concerned, I was too busy taking the train to New York for New Years Eve, returning on the 5 am train the next day, still pretty tipsy. Standing out in the cold, freezing my bum off, watching men dressed as woman, dance and walk up the street just was not for me. But then I got invited by my buddy Ray to go to Two Street in South Philly, better known as second street for the rest of the city. This is the stopping point of the parade, where all the clubhouses are, and let me just say, this party was off the hook. Everyone in South Philly was out, drinking, partying, and dancing. The cops just look the other way as everyone has a great time. Sure it’s a very working class tradition, and fights break out here and there, but all in all, it’s a festive spot. I was at a bar with plywood floors, with a dangerous and surly group of guys behind me, when a 60 year old woman with a voice as gravely as can be after years of smoking and a south Philly accent told the guys to back off, that she was watching out for me. And damn if they didn’t.

The more I learned about the mummers, the more I began to love it. Where else in the United States do you find such an old tradition, or any traditions? Here you will find an 80 year old woman cracking open a bud light, then breaking in to a backwards strut with the arms held out bouncing up and down at 9 am. This is the famous Mummers Strut. It really brings the community together in great ways. Participants spend months and thousands of dollars on their costumes every year. There are cash prizes, but truthfully, that does not even cover the cost of the costumes if you win, it’s all for pride. I always find it amusing that these big burly guys that would crush you if you ever said anything bad about the eagles will be putting on peacock feathers, tights, bright outfits, covered in glittering jewels. It’s really the fanciest drag show out there. 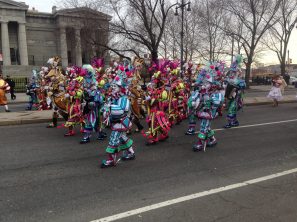 There are four main categories of revelers, the Clowns, the Fancies, the String Bands, and the Fancy Brigades.

The Clowns are for comedy, and their costumes are very amusing. They run, do skits, hop over each other, and anything they can do for amusement. This is the largest group, and tends to be the craziest. Often their costumes will be parodies of current events.

The Fancies costumes are really akin to birds of paradise, with fabulously elaborate and ornate costumes, bedazzles to the max, lavished with feathers and furs.

The String Bands are just that, with costumes classier than the clowns, but nowhere near the Fancies. They bring their instruments along and keep the beet and rhythm of the parade. They are limited to acoustic instruments, no electric.

Then there are the Fancie Brigades, which are like the fancies, but with moving floats and many more characters. Their costumes, props, and gear are so intensive, that they now perform inside the convention center for fear of it being destroyed by the elements. 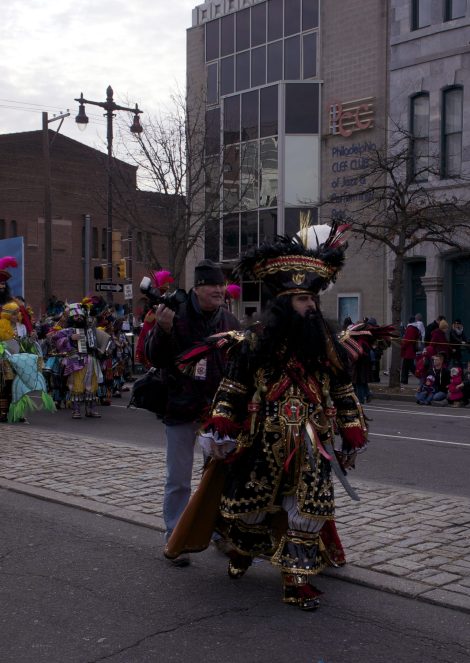 Like all good things, there is controversy with the Mummer’s parade also. Even though there are African traditions mixed in, and up to the 1930’s there were actually all black mummer parades, for many years black face was painted on the mummers. I for one have never seen this in all the years I have been here, and think it is a thing of our racist past. At least I hope so.  The news medias are making a huge deal this year there is a transgender contingent to the parade. I don’t find this controversial at all, but apparently it is. I think this is great, for I have always loved going to drag shows, and this one is the biggest.

This is pretty much an all day event, culminating in the insane Two Street Party. It’s considered the longest parade in the United States. Being a Philadelphian now, I feel no pressure to see the parade. Instead I just wander the city and enjoy it in small doses. You catch a Fancie performance here, or run in to a herd of clowns there, or stop and listen to the string bands play there. I have only seen the fancy brigades once, back when I first moved out here. But it’s televised so it’s nice to relax and watch it at home or from a bar. And of course, I always enjoy stopping by Two Street for the festivities. Being in Philly, the Mummers are just part of life here, and hopefully, will be for a long time in the future too.