How does one get to Africa from Ireland? Well, through Germany of course. Everyone one knows that. The great part of going someplace so exotic is that even mundane boring things like catching buses, flying international, shaving, all have a tinge of adventure to it.  The makes everything more exciting because I was going into the unknown.  Just like the song from the new Frozen movie. 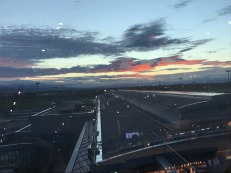 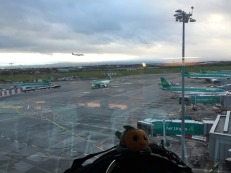 After spending a wonderful day in Germany, Christian and I headed to the airport. At the bar I met my new travel companions; Klaus, Dorothee, and Heike.  Klaus is the head baker/owner of Bäker Peter bakery. I had met Klaus and Dorothee at a Family Day at the bakery about 5 years before. A few years after meeting them I illustrated a coloring book on the baking process at the Bäker Peter Bakery.

Christian had handed me the tickets buy I never even looked at the ticket to see who we were flying with.  Turned out it was with an airline that I had never heard of before, Corendon Airlines. I was in good ole isle 33, last row on plane, with two lovely bathrooms next to me. This was a discount airline so the seats were really tight and the back row does not recline. Numerous people stood for the majority of the flight.

On the plane heading to Gambia.

There was a couple in their 80’s sitting next to me. My first thought is they probably were not going to complain with everything and need to get up a lot. I was so wrong about this  and it just shows how stupid it is to make generalizations in life.  There was little chance of sleep on this red eye because I was really excited to go not to mention very uncomfortable. I decided to work on my cover illustration for a children’s book I was working on, Zoo in Me. Well, anytime you are drawing, it gets attention. The older lady next to me asks about what I am working on, so I showed her a copy of the rough book.

Well, this got the conversations going and we ended up chatting for hours. They were originally from South Africa but live in another part of Africa now. They were both teachers and had built their own house. This is where it got really cool though. The husband had built a sailboat from scratch, and they had sailed all over the world together. Even now, in their 80s, they were still traveling. They had not been to The Gambia before, so they were going to backpack around for a bit. After many great stories including massive storms and such, she curled into him and went to sleep. Never has there been a cuter sight. This is the true dream here, to be in your 80s, still happily in love, traveling together.

A small detail from the cover design of Zoo in Me.

We landed the plane around midnight, and the weather was gorgeous and warm. We were ushered into a construction site and everything was chaos. It was concrete building, which looked like it was half finished. Wires and pipes were sticking out of the ceiling in all directions. There were two booths for folks to go through and they were fingerprinting and doing retina scans. Most Europeans were free, but American citizens need a visa. I was supposed to go to an embassy ahead of time to get a visa for 30 dollars. Problem was the embassies are in New York and DC, and I had no intention of flying there. I had read online though that if you go to a government building in town with in three days of arrival you could get a visa. In my Gambia book they said sometimes they do it at the airport. When I asked the customs agent, she gave me a blank look. After some conversation in a language I did not understand with her colleague, she said $55 bucks. I knew it was supposed to be 30 but that’s the price you pay for winging it. Of course, I only had euros, so it was more like 60 bucks.  The money disappeared in her pocket and she did not even look at my passport. Everyone else was fingerprinted but I was just waved in, almost like I did not exist. Haha, it did not matter, because I was in! 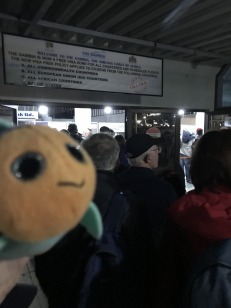 Our ride was waiting for us at the airport and we all crowded into a minibus loaded with our luggage. I sat in the back with suitcases as we drove out of the airport and onto one of two paved roads in the country. It was not long before the driver turned down a dirt road that was bumpy like moguls on ski slopes. The dips and bumps are big enough to take an engine out if your wheels are in a hole.

Which is something that had happen to me in Michigan when I was off roading with my friends  Jeep Wrangler. Christian had been there at that time too, though we were only 16 then. I had to run 7 miles out because the engine mount had snapped. We tied the engine up with sticks and then a come-along I had purchased.

On the roads in Gambia people had put bricks blocking the roads with just enough room for a car to get through every 20 feet or so. They were alternating so that you would have to drive from one side to another just to get through. This was to stop mad men from speeding down the road. You would think the skiing moguls would have been enough. After half hour or so, we arrived to a walled compound with a large blue gate. The gate opened and we drove into a lovely garden, with various buildings scattered around. Of course, it was night time, so I really had no idea where I was.

After dumping our stuff in our bungalows, we all settled in for a well deserved JulBrew, Gambias only beer. We had made it.

Oh you might wonder why a little fish keeps showing up in photos? I promised my daughter I would take it with me and take photos all over Gambia with it so she could experience the adventure with me.

One response to “Gambia with or without a Visa”