I wake up to a bright ray of sun shining on my face, a perpetual chill running up my spine, and the pounding of my head. It’s all a little fuzzy. Yvonne is sleeping next to me on a very small bed, the air-conditioner is rattling away as it blasts artic air out of its vents, but I can see out the window palm fronds are swaying to and fro. I step outside and another blast hits me. Its boiling tropical heat, and we are on the beach. Not a huge beach, but a lovely one. Dotted with trees, a row of boats lined up with their pontoons sticking off the sides, and a few dogs rolling around in the sand. The air smell fresh and sweet. I suck in a deep breath, look around, and wonder how the hell did I end up in paradise.

It’s funny how random conversations with people in Beijing end up with you being on an island in the middle of the Philippines literally three days later. Sitting in the Hostel, enjoying a free hotpot with a bunch of kid’s. We started asking where they thought would be the best place to hang up our hammock and relax for two weeks. A young couple suggested a small island at the tip of Cebu, Mala-something-or-another. It sounded nice, so we stopped at a bookstore, looked at a map, found the island, and read its brief description in Lonely Planet.

We were sold. Diving for me, beaches for Yvonne, small and off the beaten path. So the fun begins. After a long flight from Beijing to Manila, we then hopped on another flight to Cebu Island. We arrived late, but were keen to get going to paradise. You don’t want to rush anything in paradise, but you sure as hell don’t want to wait to get there. At the airport we debated buses, private cars, this, that, ohhh hell. We were both getting frustrated at each other, make a decision already. Where to go. Times like this little things become big fights, after all, we had been on flights and airports for a day, and we just needed to get there. But money was hanging over our shoulders. Stay in Cebu, which did not seem that interesting. We stomped away a few times, negotiated with drivers, stomped away again, and wasted a good forty minutes of questionable time, when I decided “Screw this” Grabbed the driver, “Locked in price”. Fine I said, drive us to an ATM, then to the island, and fast please. Last boat supposedly goes at 5. And like that we were on our way, in a nice, private, air-conditioned car. Bradgelina don’t have it this good.

A few hours later we were dumped off on a jetty of boulders, with 5 or 6 Banca boats. Banca boats are double rigger canoes. They range in all kinds of sizes, from small one person boats to 80 ft long passenger shuttles. I would say the ones docked here were 30 feet long. They all were going to Malapascua, but some were private dive boats, some were this, some were that. Which means they would not take us. Touts were everywhere, quoting the most insane prices around. Prices ranged from $300 dollars to rent the boat, no, how bout $150, oh ok $100. The book said it should cost around 5 bucks or something like that, and there was a ferry going at 5. But the touts would not tell you which was the ferry. They always say, it had left for the day. I was not going to be scammed this day. I went to every boat and talked to their captains. I begged, I pleaded, I threatened, and cajoled. All to no avail.

They all wanted so much more. As I was arguing, Yvonne was just staring at the angry clouds gathering deep in the ocean. While I kept playing the game. I asked a local girl what she was paying, and let me tell you, a dollar was a hell of a good deal. So in the end, the Captain told me to get on board, grabbed our bags, and we got our ride for 10 bucks each. Yvonne wanted a hotel on the land by this time, but they had already grabbed our bags, and truthfully, I just wanted to get there. 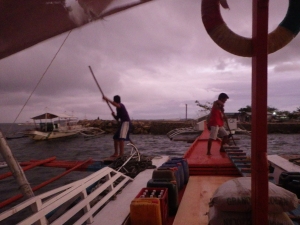 It was not long before the waves started pounding the front of the boat, soaking us to the bone, and shaking us back and forth. Then the rain hit and we all found shelter hiding under whatever we could. The tarp that they called a roof did nothing. Then, well, lets just say some one flicked the switch. The lights were out, and we were in the dark. Oooohh boy. The boats had no lights on them at all. The only thing I could see was the ghostly sheen of Yvonne’s face, as fear and tensions drained all the blood out of her body.

“Mike we are never taking a boat this late again!”

The only time your really could see were the bright jagged flashes of lightning that shot across the sky illuminating the seven passengers on the sea. Two boats set out, but all the others had disappeared. There was no sight of the island, or really anything. The boat was being tossed around like a log in rapids. We seemed to be just driving around in circles, endless circles, as the weather just got worse and worse. We could not see any land now, in any direction. Occasionally we would catch a glimpse of the other boat, and now one of our greatest fears was a collision with it because you couldn’t see anything.

Things are getting a bit muddled in my memory now, but as I remember it things were getting incredibly hairy. Finally Yvonne had it, with a piercing stare of pure anger in my direction. She turned to the driver, in her loudest voice, yelled “Captain, do you even know where the island it!”

As far as talking to me, well, that was not going to happen. She rebuked all my efforts of reassurance, with a nasty glare to go. The captain assured us all was good, not to worry. After an hour of driving around with no real direction, the storm cloud lifted up, and we were able to get our bearings again. The island was a small dot in the distance, and the lights were all out. But at least we could see it again. So cranking the engine on high, we shot towards it. We pulled up to the beach, and one of the boat helpers jumped in to the surf, and pulled the anchor up on the beach. It was spitting a bit, but over all the rain was finished for now. They tossed a gang plank down, and started throwing our luggage on the beach. We did not exactly kiss the sand when we got off the boat, but we certainly had that desire.

I asked the captain about directions or accommodations, and he just grunted and pointed at the beach. Ok, well, we were on the island, and that is all I cared about. In the dark we could only see palm trees and the silhouettes of various buildings. We found a path running parallel to the beach and started walking down it. There were a few hotels, but with the power out, and no one about, it felt like a ghost town. Finally we got a hold of someone, and she lead us to a two story building. The rooms were more than we wanted to spend, but we just wanted to throw our bags down at this point. It was 9 and we had been traveling for days. The room was clean, and as we were inspecting it when the power came back on. Not too shabby I have to say. White tile, clean bathroom, and air-conditioning. It was not our thatched bungalow on the beach we were hoping for, but it was home for now.

We went straight to the beach bar after that and ordered a big shot of whiskey and beers. Boy did it ever taste sweet. We toasted to life, surviving the boat trip, and never to not listen to Yvonne when she said she did not want to get on a boat again. That one drink led to many more as we toasted everything and that is how we ended up in paradise.

2 responses to “Turbulent Arrival to Malapascua”